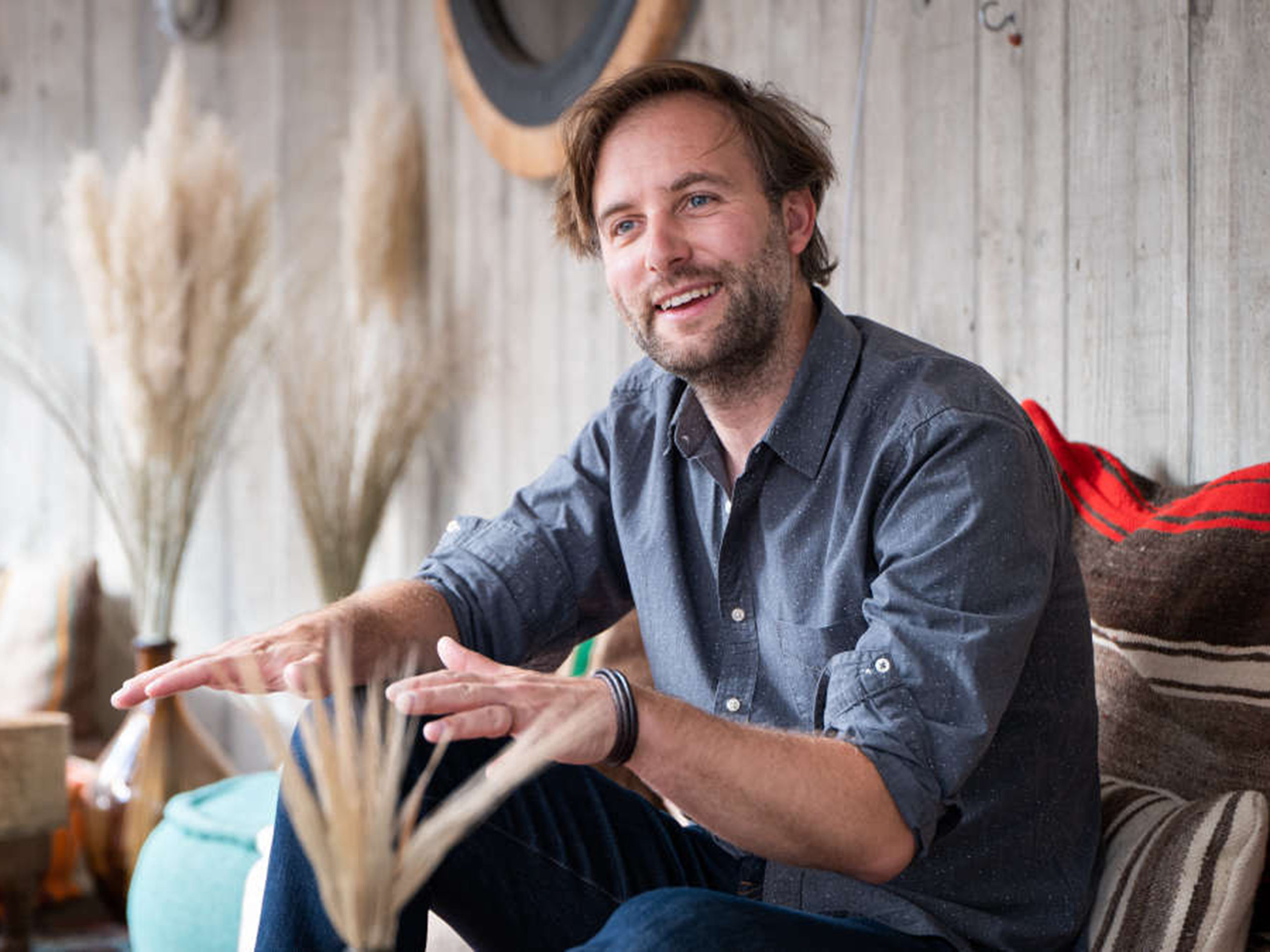 Meet and greet with the artists in residence

A new artists' residence has been set up at CERVO Mountain Resort in Zermatt. Nicolas Steiner and Laura Killian were the first artists to stay in the "Cabin Essence". Here you can read about their experiences.

Nicolas Steiner, a film-maker from Upper Valais, is less than 40 years old, but this didn't stop him from taking the so-called "Pensioners' Trail" ("AHV-Weg") every day in January. This is the name given to the circular trail at CERVO Mountain Resort in Zermatt. He sat on a bench in the sunshine and made decisions. Nicolas Steiner determined which lead actors he wanted to work with on his next film, The Flying Mountain, and which scene details he wanted to edit in his script. Steiner's stay in Zermatt was no holiday. He and Laura Killian, a conceptual-art photographer, were staying at CERVO's new artists' residence – called "The Cabin Essence" – in order to work.

The idea behind the "Cabin Essence" is the brainchild of Daniel F. Lauber. Last year, Lauber set off on a walk. From St. Niklaus, he walked towards the Augstbordpass via Jungen. Nicolas Steiner came to meet him from the other side of the pass. Together, they then continued towards the Turtmannhütte, a mountain cabin for walkers and climbers. During the long hike, they had plenty of time to talk about the creation of an artists' residence. "And so one thing led to another," says Nicolas Steiner, "and Daniel offered Laura and I the chance to be the first to try out the 'Cabin Essence' and spend three weeks there".

The suggestion was a timely one, as Nicolas Steiner was working on his film project The Flying Mountain. "After all, the Matterhorn does fly away when the clouds descend on Zermatt," he says and laughs. Steiner decided to work on his script during his time at CERVO.

When the artist Laura Killian and the film-maker Nicolas Steiner arrived in Zermatt in January, they encountered a winter wonderland. Released from their everyday tasks, they were able to fully concentrate on their artistic endeavours. They had the freedom to create new things. But as is the way with creativity, it cannot be activated at the push of a button.

"First we had to find our feet there, and were initially almost overwhelmed by the abundance of what CERVO had to offer us," says Nicolas Steiner. Daniel F. Lauber noticed this and encouraged them to free themselves of any pressure to be productive, and instead allow themselves to just "be" and experience.

Nicolas and Laura had both recently gone through a stressful time. The production of the Netflix series Dig Deeper – which Steiner oversaw as the first Swiss director to be a player on the world-wide TV series market – had been very demanding for him. Yet the couple had also faced major challenges in their private lives.

Laura Killian talks openly about these difficulties, and about the fact that, because of their busy professions, neither of them had had any time to come to terms with these before their stay in the "Cabin Essence". She says: "We suddenly found ourselves in a protective cocoon. Pent-up feelings and emotions emerged." And because their engagement with art – regardless of the medium – always involves emotions, impressions and experiences, this confrontation was presumably much more important than the actual production of art, she feels. "That was the magic of the 'Cabin Essence'." Their stay also became a time for self-reflection and processing.

Laura and Nicolas became aware that admitting this to themselves was a prerequisite to rediscovering their inspiration. "This fresh inspiration also made the ideas flow freely once more – and with the ideas came healing and self-discovery," states Nicolas Steiner. An untameable creative energy was also unleashed.

Laura applied for the artists' residency with the aim of creating a photo project that would draw its inspiration from the experience of the residency itself. After using the initial part of her stay at the "Cabin Essence" to touch base with herself and bring her body and mind back into balance, she found the energy to create a concept for a new photo series.

Laura Killian is a native of Texas, USA. She spent many years living in Los Angeles. She was already in her mid-twenties when she saw snow for the first time. And now it was snowing in Zermatt. In the morning, she observed the blanket of snow that had draped itself across the landscape during the night. The world seemed pristine and untouched by human hand. As a conceptual photographer, she wanted to use snow as a state of matter and as a mass. And she created a self-portrait that depicts a re-connection with the self: snow on bare skin.

"There is a vulnerability in nudity, but only when you are exposed (including in the metaphorical sense), authentic and open can you truly transform yourself," Laura explains. With the image of snow on bare skin, she created a self-portrait that symbolises the pain we sometimes feel when we find enough peace to reflect and process trauma.

He states that throughout his and Laura's time in the "Cabin Essence", the CERVO team conveyed an attitude, a lifestyle, a pioneering spirit and the joy of experimentation. The couple felt infused with this same spirit when they left the resort after their three-week sojourn, he says.

Half a year later, the film project The Flying Mountain – for which Nicolas Steiner wrote the script and which he was set to direct – was on shaky ground. The international co-production was to be financed by Switzerland, Austria and Ireland. The plan was to film in Valais, Austria, Ireland and Western China.

"A few days ago, the Austrian film fund withdrew its offer of funding," says Nicolas Steiner. This meant it wasn't apparent whether the film could actually be produced. "The funding for this international cinema-film project is highly complex, and we have to find new avenues of funding and new sponsors so that all the painstaking work on this film over the past six years doesn't get permanently shelved." He hasn't yet given up hope. It isn't certain how things will continue. To make this film a reality, Nicolas Steiner has even turned down the opportunity to direct a hit crime-drama series and other international offers.

The "Cabin Essence" artists' residence is currently being occupied by Veronika Bendik. The photographer, who has Ukrainian roots and resides in Switzerland, is writing a book. On the terrace of her roof at CERVO, she has found the ideal place to write. Here she sits, gazes at the mountains, and types her story on her smartphone. She says she became aware of the artists' residence through an Instagram post by Laura Killian.

Benjamin Dietsche, Deputy General Manager at CERVO, says: "Three to four times a year, we offer a residency at the 'Cabin Essence'." Interested artists can apply to the resort and present a project they wish to work on. A jury then selects which artist gets to occupy the residence for the three-week period.

As Benjamin Dietsche states, the CERVO is defined by its philosophy of "Beyond Culture". The resort collaborates on a regular basis with live bands, DJs and artists. The "Cabin Essence" is there to help artists find creative inspiration. They are free in deciding what they wish to do, Benjamin Dietsche explains.

"In return, we have agreed with the artists that they leave us with an artistic object where possible." This can be a poem, a photo or an image. In a few years' time, these objects will then be used to create an "artist wall", he explains, which will show who has stayed at the "Cabin Essence" and what they created there. It hasn't yet been decided who will stay at the "Cabin Essence" this autumn. "We are still accepting applications," states Benjamin Dietsche.