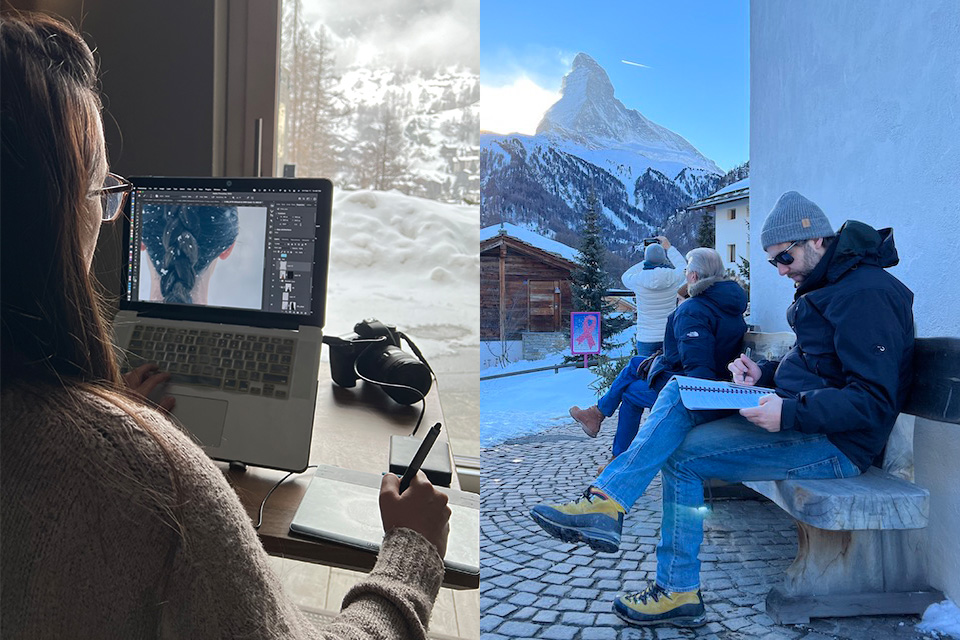 Curtain up. Warming rays of sunlight reach my hands. The reflection of pure white, from the snowflakes conjured up in the night like powdered sugar on the terrace, make my already flickering eyelids clench. After a thrilling and groundbreaking day at work, rounded off with an Italian dinner at the quaint Madre Nostra - living the culinary tradition of its southern neighbors in all its deliciousness - and a fading nightcap at Ferdinand - it's the night, perhaps a bit too short, that barely hides the marks on my face and brings a smile to my face at the morning's hearty greeting from the CERVO breakfast staff: "Long night?" - "Nah, long day... :)". African beats and a song with a charming "Kiss, kiss" in the chorus enliven the good mood and the urge to discover, create or move forward again today.

As if from an unreal winter wonderland, the morning view through the large window front contrasts with the equally stimulating interior of the Bazaar - the heart of the Mountain Resort inspired by vibrant markets in the Orient and North Africa. In the hub of CERVO, it seems that every object, every character, and the staff, with origins from all over the world, have brought their own story with them. And since we're storytellers, we soak it all up.

In the daily life of a freelance filmmaker and a conceptual art photographer, it is a great opportunity to escape for a while from the familiar routine, from being tied down and from basic needs and existential worries. To fully engage in the artistic work, detached from everyday life - the freedom to create!

The CABIN ESSENCE as a form of an artist residency and as a place of escape has emerged as a unique possibility, which knows how to offer exactly this free space. And it does so in an inspiring place created by man and yet so close to nature and with down-to-earth roots. Body, mind and all senses are stimulated and challenged.

The crazy thing about the CABIN ESSENCE experience was that we were a bit blown away by the opulent offerings at the beginning. We were antsy. This was also noticed by the Founder of the CERVO Mountain Resort and initiator of the artist residency. Daniel F. Lauber had told us at an initial meeting on site that we should break away from a working grid, immerse ourselves and create as we wished. We should help create, experience and live the Cabin Essence, not the Cabin Fever.

We took these almost warning words very much to heart. First it was: Let go, dive in, let it work on you and above all, let it happen! We were in a place where we felt comfortable. We suddenly had time and found ourselves in a protective shell. Pent up thoughts and emotions came out. And since our involvement with art, in whatever form, always has to do with emotions, impressions and experiences, this confrontation was probably much more important than the actual producing. And that was the magic of CABIN ESSENCE.

The last two years presented us with several major challenges. Strokes of fate were not dealt with due to time constraints - we were in the middle of producing a Netflix series. After talking with Daniel, we realized that the CABIN ESSENCE was not just for creating. It was also going to be a time of processing and a self-reflection. Only this admission would also bring back inspiration. And with inspiration came ideas, and with ideas comes healing and self-discovery, and through that, unbridled energy to create again.

Back to the initially mentioned, turbulent working day. On the said morning, I take an old pair of Swiss military binoculars hanging in the room and look at the landmark of Zermatt, which I have actually known for a long time and yet have never explored in such detail: The mountain towering above the village, with its sharp rocky ridges on its flanks, perhaps also intimidating for some, depending on the situation and weather conditions - this unmistakable mountain peak!

Also on this day the Matterhorn shines majestically in its full size, power and confidence, which I would love to transfer into my figures and stories, maybe sometimes also into the self-confidence of an artist. The Matterhorn cloud (a banner cloud waving like an imposing flag as a constant companion on the downwind side) completes the painting already used by many artists. The formation of this worldwide known boulder spurs my imagination and closes a circle to the heart of the CERVO - the Bazaar - in a sense that is perhaps not to be taken completely factually: As a plate tectonic consequence of the movements between the continental plates millions of years ago, the local mountain of Zermatt lying at its feet - the landmark observable from every room of the Mountain Resort - seems to be perfect as an erosion relict of the African/Adriatic plate and thus a direct piece of Africa in Zermatt.

With the courage and power of this irresistible sight, I made an investor call for a new project that had been put off for some time. With the right "state of mind" and conviction, the conversation turned out promising. Afterwards, we set out on an almost daily walk on the so-called AHV path ("retirement walk"), which starts just outside CERVO.

Woe to the one who gets irritated by this name. At over 1650 meters above sea level and after our journey began a few days ago at sea level (Los Angeles, California), even this beautiful walk with starting and ending point CERVO can make you feel that the air is getting thinner. The views over the village, the deep silence and the trees coming closer and closer, compensate for the heavy steps in the deeper snow.

We remain seated on a bench in the sun. A swarm of hungry alpine jackdaws circles above the village. They skillfully defy the rising wind. They spar and speculate like greedy carrion vultures on the guests from all over the world strolling through the street, who would have culinary leftovers to offer. There, on this bench, under close observation of the jackdaws, I make an important professional decision, namely the casting of the two leads for my next feature film. Laura, meanwhile, is looking at small crystalline snow particles on a pewter cone like a gold nugget....

My main focus during the CERVO Cabin Essence was on my new international feature film "DER FLIEGENDE BERG - The Flying Mountain", a co-production between several countries where I am writing the book and directing. Filming will be spread over one year in five countries. During my time in Zermatt, in addition to important discussions and decisions, I have been developing and revising the script. I considered how the evaluation from the casting for the main roles just before Christmas 2021 in Ireland could change the book. In addition, my stay in Zermatt enabled me to make contact with locals, as we want to shoot a part in the Swiss mountains - especially for glacier scenes, which we can't capture in the Himalayan mountains.

Laura applied for the artist residency with the goal and desire to create a photography project inspired by the experience of the residency itself. After realizing during the first week what a wonderful gift the CABIN ESSENCE represented to return to herself and unite body and mind, she developed initial sketches and a concept for a new photo series.

Growing up and educated near Austin, the capital of Texas, and eventually living and working in Los Angeles for over twelve years, Laura rarely saw snow, which is why being in Zermatt in the winter was insanely impressive and rewarding for her. She was fascinated by the idea of snow being something so intricately beautiful and yet an extremely harsh element of nature. She wanted to play with this juxtaposition.

As a conceptual photographer of self-portraits, she wants to use snow as an aggregate state and mass to create images that represent a reconnection with yourself: Snow on bare skin, symbolizing the painful but ultimately necessary and beautiful process of facing reality, your experiences and yourself in order to heal and move forward. There is a vulnerability in nakedness, but only by being naked (even figuratively), real and open, can you truly transform.

In addition to concept development for this new series, the time she gained in the artist residency also served her to create digital organization and order. This includes the at first glance uncreative tasks such as categorizing photos, sorting them out, editing them and planning the new upcoming projects.

The CERVO as an internationally recognized and rightly awarded Mountain Resort, radiated for us an insane power and attracted magnetically. It is a vibrant place that you love to be a part of. As part of the CABIN ESSENCE, CERVO and the team working at the resort embodied and conveyed to us an attitude, a lifestyle, a joy of discovery and experimentation - mixed with a down-to-earth & passionate way of working - polished with a flair and an infatuation for detail - that immediately stands out and triggers an urge to create ourselves and with which we left as well after three weeks.

It is indeed a transforming work in a feel-good place where we could give ourselves the necessary freedom to our own creativity and work as filmmakers as well as photographers. Our own values and the standards we set for our work were reflected in CERVO. It was and is a fusion of two worlds that we had never known before. We consider ourselves lucky to be able to take our projects further in a place where we felt at home.

We are firmly convinced that this stay will carry us for a long time and has had a lasting impact on us. Personally and in our work. We would like to thank the initiator Daniel F. Lauber and the entire CERVO team for the trust and the opportunity to be the enthusiastic first participants of the CABIN ESSENCE. It is great to have become part of the CERVO family through this experience. We made a lot of new friends, gained inspiration and energy, got closer as artists and brought our projects a decisive step closer to the goal.

Cultural professionals, creatives, artists and the CERVO - a love story that we wish and trust will have a lot of love for a long time to come!